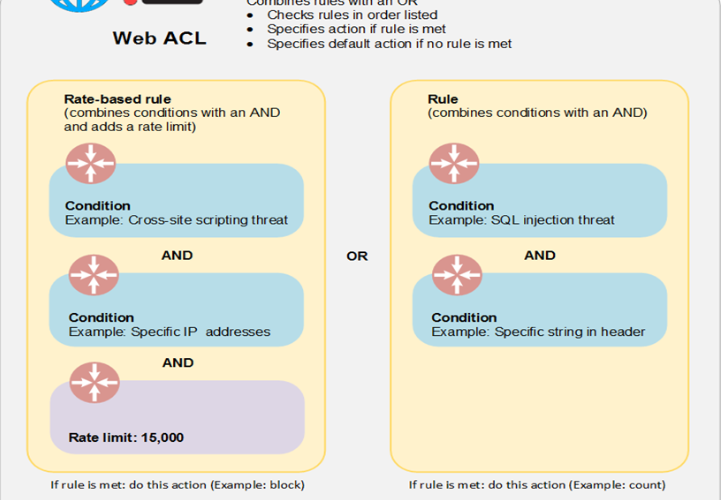 AWS WAF is a web application firewall that lets you monitor the HTTP and HTTPS requests that are forwarded to Amazon CloudFront or an Application Load Balancer. AWS WAF also lets you control access to your content.

The Basic components of the WAF are :

Conditions define the basic characteristics that you want AWS WAF to watch for in web requests:

You combine conditions into rules to precisely target the requests that you want to allow, block, or count. AWS WAF provides two types of rules:

Regular rules use only conditions to target specific requests. For example, based on recent requests that you’ve seen from an attacker.

Rate-based rules are similar to regular rules, with one addition: a rate limit. Rate-based rules count the requests that arrive from a specified IP address every five minutes. The rule can trigger an action if the number of requests exceed the rate limit.

After you combine your conditions into rules, you combine the rules into a web ACL. This is where you define an action for each rule—allow, block, or count—and a default action

When a web request matches all the conditions in a rule, AWS WAF can either block the equest or allow the request to be forwarded to CloudFront or an Application Load Balancer. You specify the action that you want AWS WAF to perform for each ru